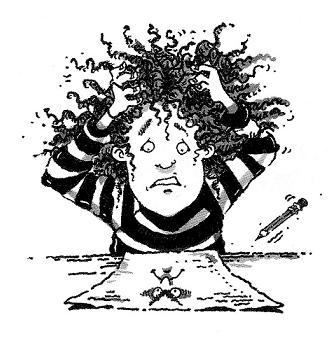 This week's challenge is to create fiction in a -punk genre, preferably one that hasn't been done before.  I give you hellpunk, a world of stolen energy and malicious invaders.

"The most important thing to remember here is that lunch is from 12 to 12:45, no earlier and no later.  You follow, rook?"  Rory paused his brisk pace to glance back over his shoulder.  The new guy was right on his heels, nodding and tugging uneasily at his loaner uniform.

"You're rook until you get through the probationary period.  I've seen too many fresh-faced kids wash out to learn names any earlier than that." They stopped next to a facility map mounted above a water fountain.  Rory tapped the display and it zoomed in to follow his motions.  "Main entrance is here, where you came in.  We came this way through the locker room." Greg tapped a large room in the center of the image.

"Central siphon and storage.  That's where it all happens, and where it sometimes goes wrong."  Rory took a moment to look the kid over.  No more than 23, probably fresh out of vo-tec.  "You understand your job?"

"Maintenance and containment.  Fix what's broken, trap what gets through." Greg said, his face lighting up and then falling in response to Rory's stone faced stare.  "Right?"

"That's a textbook answer, rook."  Rory said, stepping away from the map and moving down the corridor.  "We're dealing with dimensional exchange.  We're sucking power straight from the devil's own doorway.  So yeah, we fix what breaks and we trap what gets through but that doesn't cover it.  We deal with demons.  Not those branded reformed types they let roam the streets.  I'm talking genuine, hell-on-wheels, free-willed demons."

"Sims don't bleed acid.  They don't belch fire and they sure as hell don't smother you with their skin.  You've seen movies, rook.  Things out here are real."  Greg straightened up, the oversized uniform falling limp around his shoulders.

"I've been fully trained.  I scored 273 on my licensure exam."  A chirp from Rory's radio ended the conversation.  He tapped the button and one of the surveillance tech's began to speak.

"Hey, we've got a rank one blip in the east siphon chamber.  Looks like an imp came through on the last pulse.  You free to check it out?"  Rory shot Greg a glance and shrugged.

"Looks like we'll see that training in action.  We're on it."  A second tap on the radio killed the connection and Rory began the trek towards the east wing.  He didn't pause, just jumped right into the next speech.  "Imps are cake.  Small, quick but pretty harmless.  Irritants more than anything.  Pulse spikes tend to frazzle the safeguards and imps are already weak enough to slip through on bad days."

"So is this a standard incap and deport?" Greg asked, trying to keep pace.

"As standard as it gets when you deal with other-dimensionals.  But yeah, we'll shriek it and toss it.  Your shrieker is your best friend here.  Harmless to humans, hellish to demons.  Even works on devils if they aren't leeched."  A flight of stairs and two left turns brought them to a pair of reinforced metal doors.  Two men in black and grey security uniforms stood at either side, rifles slung over their shoulders.  One nodded and worked the locks, pulling the door open.

"Don't let the guns fool you.  They're here to scare away angry protestors and terrorists.  A gun won't slow down a devil, andeven  demons can laugh them off for a few shots."  Tapping the radio, Rory cleared his throat.  "We are headed in to the east siphon now."

"Anything I should expect?"  Greg asked, his confidence clearly suffering now.

"The secondary siphon chambers aren't too bad but you can expect to feel some changes.  Pressure behind your eyes, a cold hollow in your chest, nosebleeds...all common.  If you start to feel numb head back to the hallway.  Don't wanna risk a seizure in there." Rory said as he pulled the shrieker from its holster.

"Got it."  Greg said, peering into the ochre glow.  A push from Rory got his feet moving and they both stepped through the door.  The door closed behind them with an echoing *thud*.  Rory tapped his finger against the shrieker in his hand.  It always reminded him of an electric razor, the kind they had before laser shavers became the rage.

"You go around the left side, I'll go right.  Keep your shrieker ready."  Rory said through gritted teeth.  They split, each going their own way around the large central collection tank.  Standard issue work boots came down loud on the metallic flooring.  Greg disappeared behind the collector and Rory turned his eyes up towards the vent pipes.  He spotted the torn grating easily, a perfect fit for an imp.  The collector shook as another pulse rippled through it and Rory strained to listen past it.  Was that a grunt?  A gasp?  He picked up speed, darting towards the other side of the tank.  A shriek cut through the air and he circled around in time to see Greg standing over the writhing form of an imp.

"Well, well.  Nice catch, rook," he said as he stepped up to them.  The imp was small, a runt even by their standards.  It clawed at the air as the shrieker assaulted it's heightened senses.  "Keep it centered for a few more seconds."  Moments later the imp gave up, collapsing into an unconscious heap.  Rory took the feet and they carried it over to the deportation port.  A swipe of his badge opened the eye, a shimmering oval of blue energy rippling behind it.

"One...two..."  The duo heaved the body into the pool, watching it vanish in a crackle of sparks and a puff of ozone.  Wiping his hands on his pants, Rory spared the new kid a smile.  "Not a bad first day."  Greg holstered his shrieker and started towards the door.

"It wasn't as bad as I expected." he replied.  As they moved toward the door something caught Rory's eye.  A breach in the separation tank, large enough to fit a human if they hadn't eaten in two weeks.  The possibilities flipped through his mind and his eyes narrowed.  Tapping the radio again, Rory let Greg gain some distance before whispering into the receiver.

"Central, do we have any rank 3 blips in the east siphon chamber?"  A moment passed before the tech came back with a negative response.  Stepping up to Greg, Rory put a hand on his shoulder.

"Great.  I'm starved."  he replied.  Rory exhaled in a sigh before smacking the wrench at the base of Greg's spine.  The kid went down with a startled howl and Rory was on him in a flash, pinning both arms with his knees.

"I know you're in there kid, so hear what I'm saying.  When a devil gets through it's bad business.  Fortunately they can't really grasp sorting short term memory when they first leech."  A flicker of violet in Greg's eyes revealed the presence of a rider.  "Unfortunately, once they leech there's no getting them out."  The rookie's eyes alternated between violet rage and sky blue terror.

"No...stop...wait..." It was all Greg could manage in his struggle with the monster inside him.

"I'm sorry, rook," Rory said, his voice soft as he lifted the wrench above his head.  "Today just wasn't your best day."  The wrench came down with a wet crunch and the screams of a thousand damned souls.  Rory pushed himself to his feet, letting the wrench fall next to the twitching corpse.  He wiped the back of his hand across his forehead, smears of blood tracking his skin.

"Not my best day either."
Posted by WordWeaver at 8:59 AM